Over the weekend we were at the shore and I needed more veggies for Nick. We went to the store and I picked up Dr. Praeger's Broccoli Pancakes.  They make such good tasting stuff! Nick loved them.
Today I strived to make something close using the ingredient list on the box: Broccoli, Potatoes, Onions, Egg Whites, Oat Bran, Expeller Pressed Canola Oil, Arrowroot, Salt, Garlic, Pepper, All Natural Vegetable Gum. 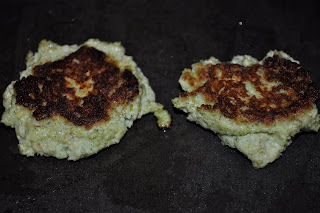 I tried baking the first batch in the oven - blah. So I used oil and fried them up on a skillet. They turned out great!  Nick liked the one from the oven, but I would not eat that, the skillet ones he will love!  I want to try using more spinach and also try spinach by itself. Love Dr. Praegers - but these will be my homemade cheaper version. 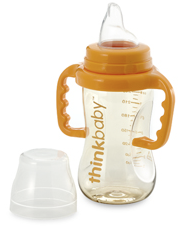 MILK
Nick is not drinking enough fluids during the day and I don't know how to get him to drink more. We made the switch to the sippy after a month of the cup pictured that was basically a bottle. Now he'll drink from the sippy cup but just sips here and there. Yesterday maybe I got him to drink 12 oz, today maybe 7?  I feel like I spend so much time trying to get him to drink milk that I don't offer him any other fluids. He really isn't into water anymore, and he'll drink diluted juice - but just sip that too.  Nick will eat yogurt - loves it, cheese is so/so.

First, I was trying to be creative and make his oatmeal using milk - he didn't finish it. I tried making a fruit smoothie w/ milk - that was a total mess and he hasn't figured out sipping from the straw yet.  I try to use milk in anything I am making that requires liquids so that he's getting it and that helps sometimes.  I was reading some blogs online that said add a little strawberry milk, chocolate milk, yogurt to the milk and see if he drinks that.  He needs fluids of some sort even if it isn't milk and I give him more yogurt, cheese, and other sources of calcium. Anyone have any tips either for more milk or more fluids?