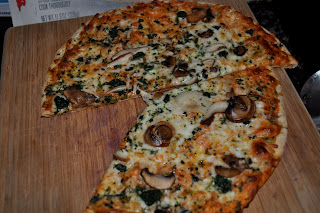 This is Kashi's Mushroom Trio and Spinach Pizza - Wood Fired Thin Crust. I had this one night last night for lunch in a hunch. It was really tasty! The mushrooms were yummy, they stood out the most. The cheese was decent, and there was minimal sauce - but it was good. It was crispy also. Here are the nutritional facts - my thoughts on that: I could have eaten the whole pizza for sure. It has a decent amount of sodium - so you have to watch! The protein is good and calories decent. Whenever I have a boxed pizza I wonder how bad real pizzeria pizza is for you. 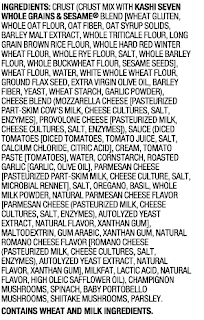 I checked out this cookbook from the library after really wanting some more Girl Scout Samoas and hearing about the Vegan Samoa recipe. For the vegan eater, this cookbook has loads of great recipes. Don't be fooled - they are not healthier than normal cookies, they just do not use dairy products. I think the recipes in there for vegan cookies are fantastic! I think I went in with the impression that the recipes would be somewhat healthy - use agave, flax, whole wheat flour... but for the most part, they do not. The key is that the recipes do not sacrifice taste and this is why!

I tried the Vegan Samoas but cooked them too long. It took alot of work, toasting the coconut, then dipping in chocolate... in the end they were so/so, I have to try them again and cook less for a softer cookie.

Oven to 350. Pour coconut onto a large skillet and toast over medium low heat. Stir and toast until light golden brown about 8-10 minutes, be careful not to burn.

Scoop 1 T of dough 2 inches apart on the baking sheets - flatten and work a small hole into the center of each - a straw works well. Bake 8 minutes until edges are golden.

While cookies are cooling, melt chocolate chips with coconut oil, cool 5 minutes to thicken, then dip cookie bottoms in chocolate and drizzle the tops with the rest. Use wax paper for this part! Chill! 2 dozen cookies! 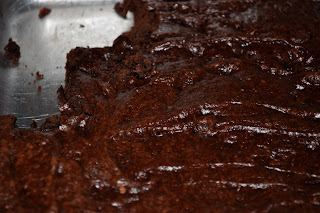 Oven to 325. Line/spray an 8 x 8 pan. Puree tofu, milk and oil in blender. Transfer to a mixing bowl then use a fork to mix in the sugar and add vanilla. Sift in the flour, cocoa, corn starch & powder. Fold and mix until smooth - transfer to pan. Bake 30-32 minutes.

There are a few more that I want to try so stay tuned.

There was a point in my first pregnancy where my workouts switched from morning to afternoon. I needed the extra rest and mornings didn't seem to work out for me - I would not be warmed up, get side stitches and have a bad workout. I'm right in between 23-24 weeks and this is happening now. I have made it to swim only once per week. Getting up is brutal! The workout is great, but the rest of the day I am spent. Yesterday when I woke up to run, I was not feeling it, warming up took forever and it took me over an hour just to do 5.3 miles. I might try doing my workouts during Nick's afternoon nap but there are so many other things I want to do during that time!
Posted by N.D. at 10:15 AM