Good run today! I feel like it isn't justice to call it a run when it's on the treadmill. I should call it "run in place" or hamster dance. I didn't go outside (again!) but I had a nice workout. Yet, what I've been thinking is, I haven't done any speedwork or tempo runs in about 2 weeks. And before that one 2 weeks ago it was probably a month - but I guess races can count since I was doing so many at the time. But, I have just been hopping on the treadmill and running. I should probably incorporate more variety. It would be better for my running and less boring! I think that I used to have days where Tuesday would be speedwork and Thursday would be hills or something like that, then I just stopped doing them, and now everytime I log my run on Runners World, I always categorize it "easy." It isn't really easy though, I just increase the speed as I go along. I will work on changing it up a bit here. Maybe I'll write up a schedule to be more motivating. The last bunch of days I just ran everyday, kind of boring and probably not good for the body either. 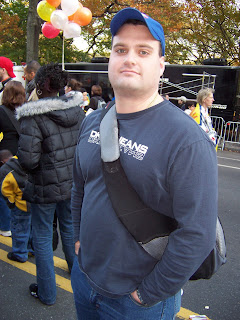 6.25.05 lll
Today is our 3 year wedding anniversary! It flew by and I have the best husband & best friend. If someone can put up with me for this long, he is definitely a hero. I can be so particular and uptight at times. Along with my parents, he is my biggest fan at races, and this year I dragged him to quite a few. He was even asked to help participate in one of them and when I got to the finish line he was literally standing there clapping - his job was to direct people into the chutes. I thought he had a stellar spot for cheering! I'm still trying to get him to be my running partner, but so far, I've been unsuccessful. But, I'll take the support and #1 fan if I can't get him to train for and run a race with me! This picture was from the NYC marathon in '06. He climbed a fence or something with my brother and got a big hole in his new jeans. I remember around mile 24 when I was majorly just considering dying (was having severe stomach issues from mile 13 on), seeing him along the sidelines and stopping for a kiss and hug. I'll always remember that moment. Well, happy 3 years and many more!

I'm going to write later about my expedition today meeting with a personal trainer.
Posted by N.D. at 9:36 AM