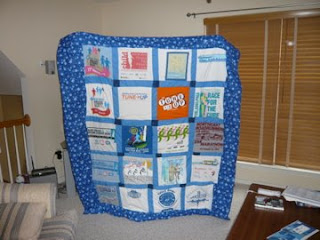 Have you heard about the bank robber runner in PA? Maybe he is in training. Pretty crazy!

I am in the final stage of my mofo quilt. I named it that today, or the F quilt after I wanted to yell at it and the sewing machine several times. I really SUCK at sewing and going in straight lines.
I only have a little bit more to do and it is done. At the end, you go over all the lines so that it gets sewed together with the middle layer and back - you should see the lack of straight lines people. It is kind of frustrating to sew it! But, whew, can't wait for that to be done. Too bad I ruined so many shirts to make railroad tracks that go in criss crosses and off the tracks. I wish I was more of a perfectionist when creating things like my mom is. I just half ass it and get it done. When it is all done I'll post some pictures.

I ran 7 miles today with the bum knee hanging out with me. With about 7 minutes to go, it started telling me to stop, but I trudged along, determined to do 7. When I was finishing 6 miles, I thought maybe I could go on to 10, but later the knee opted out. Also I had an abs class starting right when I planned to finish 7, so it was a no- go. I may try to run 3 later though, my mileage is so low this week due to the dumb injury! And it was low last week too after keeping up 30+ weeks for sooo long. Oh well, take it easy with that, better to rest than to be doing no running for a bunch of weeks. Thanks to all the doctors and researchers who have taught me new terms for knees. A couple of the things that I read and agreed with were 1) running on old shoes (IDIOT move, didn't realize they were 425+ miles on them). 2) Tight hamstrings (also, just stupid, I have been slacking off on stretching). and 3) this one I made up, there was one day last week that I just started running at my normal pace instead of my slower pace over the last month or month and a half, and I was pushing it maybe too fast, especially with the old shoes. A few days later, or maybe even the next day was 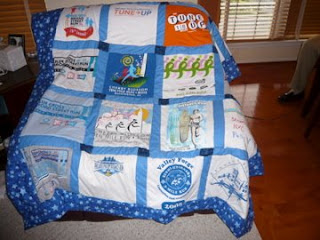 when the weird problem arrived. Thanks again for your help and support!!

Unrelated note: I met my dad for lunch at this vegetarian place that has a buffett that is like an asian/chinese theme for the food - everything is vegan I think. I asked him to go there with me before and told him it was all veggie stuff and he was totally uninterested. I suggested going to this "cafe by me" today, not reminding him what it was, he's a huge carnivore but I've been trying to get him to eat better. At the buffett, it just says "double cooked chicken" or "general tso's chicken," there was some kind of meat looking item, and my dad didn't even realize he wasn't eating meat. They have alot of veggies and tofu too, which I focused on. I didn't tell him at the end that it was all veggie stuff - I thought he might make himself puke. Was that mean?
Maybe I'll tell him at some point, I don't know - what do you think?