FORMULA
2 days ago was Kara's first day of formula. I was nervous because basically I have only a few ounces of stored milk left and I should have done it earlier but I was trying hard to wait till 10 months for the formula. I'm a little crazy about it. At least she had the breast milk for as long as she did. Formula is just fine, I just get weird about it. Anyway, she did fine on it. The first few bottles I did half and half and then just plain formula and she was fine.

Since she has no hair, my latest obsession is headbands. I had a Bondi band that was just too tight for my head and I cut it and tied it to fit Kara's. It's hard to see but super cute!  The second picture is a different headband that came with the outfit. I wear Bondi bands all the time and I'm hoping it tricks people into thinking she might look like me with the headband. Right? 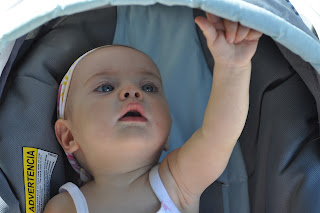 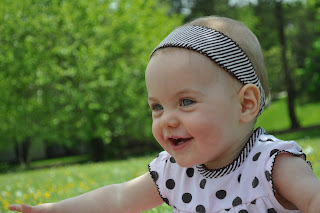 NO BOOBS
Ever since nursing ended, my boobs deflated. I now have the chest of a 9-year old, maybe 12-year old if I'm lucky. It was a nice 3 year run of being pregnant, breastfeeding then pregnant and breastfeeding. It might be worth it to try to get pregnant again to take care of this problem? It's horrendous!!


RUNNING SAFETY
On the training front, the weather has been just absolutely perfect this week. 50s in the morning, 70s in the afternoon and 50s at night.  I went to the track workout on Tuesday morning and was LOVING the weather. I was dying to go outside to run on Thursday but couldn't motivate to run trails with the faster group. I was so close but just couldn't do it. And I wanted to run outside so bad, but was afraid to run alone at 5:30 in the morning.   Do you? I think without kids I would not have questioned it, but now I question everything that might put me at risk. I found a solution and there is a runner in the group I joined that lives near me, and we are going to run next Thursday morning. Yippee!!  Do you run alone? Do you feel safe doing so? What time of day? I don't mind running alone in the middle of the day on busy roads with sidewalks.

THE BIKE
I am hoping to get out on the bike this weekend for a one hour to 1.5 hour ride. I am not looking forward to it and think my main lack of motivation stems from 1) fear of riding on the roads and 2) uncertainty of where to ride. I am thinking of just going to bike the trail that I usually run into the city.
Anyone want to join me?

TRAINING
I've been kind of in a funk but had some decent workouts this week, including speedwork and a good swim. The rest of my workouts were just ok! I signed up for a 10k this weekend and I'm curious to see how I do and if I can beat my pre-pregnancy time from 2008 when I considered myself in top running shape.  I'll report back on that! Next weekend is a half marathon then I'm off until the triathlon June 26.

PMS
Yep, if you are looking for a crazy PMS recipe, I've found this and it is deadly.
FYI you do not even need the brown sugar, the 10x is strong enough.
Posted by N.D. at 3:45 PM