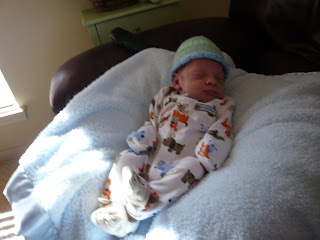 Today I did some yoga and elliptical. Tomorrow I hope to run again, but I don't want to overdo it. I went out the door shortly after Bill got home. I was trying to workout at home using videos today but never did finish one - either the baby woke up or phone rang - I was getting cranky.
Is it not right to bring Nick in his carseat to the gym while he sleeps? I know they don't watch kids until 6 wks old. He mostly sleeps so -- is that wrong ?

I'm trying to figure out what the best plan is to get into marathon training mode. Less than 2 months to go and I'm not rushing it but I would like to have a plan in place. What are your thoughts?

My first race will probably be the ocean drive 10 miler on March 29th. Then at least one 5k on April 11. Then Boston on the 20th, then Broad Street May 3. I always try to get a low number for broad street - it used to depend on when you signed up so I would keep checking back to see when registration was ready. I signed up yesterday. Broad Street was my very first race in 2004!
My goal for Boston is to finish, so I just want to get in the mileage and not get injured. Then maybe I'll go for a fall marathon for a speedier time.

I can't wait till my baby jogger comes in next week. I'm not sure though if it will be too cold to take the little guy out in it. Does anyone have that wind/sun protector? Would that be enough with some blankets and a hat for the little guy?
Posted by N.D. at 7:41 PM