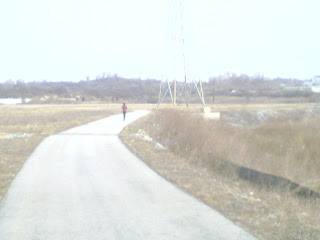 I was very, very nervous about the long run today. All of the logistics basically. Would I have enough sleep and energy? I could not remember what to wear, what to eat, and how to prepare and I was really anxious about it! Thank you to everyone who gave me some tips - and special thanks to Angela - she sent me a list of a bunch of tips to prepare! Thank you -thank you - thank you!!

Last night we were out watching Villanova play with friends who also just had a baby. We ordered pizza, which was strike 1 - so I had to bring some food along to make sure I had some good stuff in my system - some bulgar and sweet potatoes with a cut up gardenburger. I was trying to drink lots of water yesterday but kind of got sidetracked. I was supposed to go to bed early, and I kind of did - a little past 10. Nick ate around 7:15pm and I thought he'd be up to eat soon after I fell asleep and again in the early morning hours, so was nervous, but he's an angel and worked with me, waking up only at 1:15am and 5:50am (great stretches!) By the time he was done at 5:50 it was almost 6:30 and I was ready to go. But I slept another hour. I woke up before 7:30, made some pb/ toast and tea and pumped a side. I wore black pants, a long sleeve shirt and a teletubby looking SUGOI long sleeve hoodie.

We met at 8:30, and just prior to starting I pumped the other side. I brought the car with the tinted windows in the back and was looking at all the bikers around (lots out today!) and hoping no one was coming close to my car! We were off. We ran from Conshohocken to where the path ends just before Manuyunk. It was around 7.5 miles. The path is marked but Abby also had her Garmin, Neil, to confirm our distances. Which was very cool (fragment). Then we stopped at our cars for water/GU and ran in the other direction towards Valley Forge. Instead of running towards Norristown we went towards Plymouth meeting - it was a bit more quiet and there were less bikers. This is where the picture above comes from. We ran until we could just about see IKEA and turned around(a bit less than 2 miles). I took a little walk/water break here. Abby was rocking and doing and feeling great. I was definitely feeling like I was pushing it a bit and a bit behind. We ran back and then went towards Norristown for a little over a mile and turned around back towards Conshy until we finished 14. Towards the end we kept seeing lots of people dressed up for St Pattys carrying cups. Love it. I told Abby I like being on the other side of that - the runner instead of the partier. :) Abby still went out and did 4 more. Usually I would probably continue on, but my knees were kind of hurting a bit and I was feeling pretty tired. Actually when I went to put my leg up to the car to stretch, it was pretty stiff. Been a long time since I ran a legit long one outside! But - I made it. CHECK! I think I'll be a bit sore tomorrow and I'm pretty damn tired today!! I also (4 hours later) have kind of an upset stomach. I feel like dairy does that to me and I did have a slice of pizza. I almost always avoid it 24 hours before a long run/race. Do you get that?

I was thinking of getting ice for an ice bath after, but when I called home, Nick was screaming. I definitely didn't leave enough food for him, so now I know. I learned a few things that I'll do better next time! I left the one bottle of pumped milk and lots of frozen milk - but he wasn't taking to it. So next time I'll be more prepared with more food for him already prepared at a good temperature. As soon as I walked in the door, I fed him. Kind of gross but he didn't mind.
I devoured a power bar and White Choc Macadamia Luna Bar ( you have to try these, so good!) after and made a recovery smoothie (protein powder, milk, berries, banana, flax, spinach) after.

Thank you for all of the advice - and thank you Abby for running with me!

I feel good that I got one run in with a set schedule and not being too flexible about it. The rest of the long runs will go smoothly and I shouldn't be as nervous!
Posted by N.D. at 12:52 PM