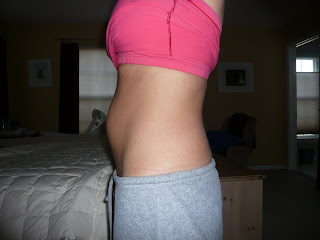 Well... today confirmed my suspicion that my body rebounded so quickly as a result of working out throughout the 9 months. I met up with some girls from school that had babies in December and they can't fit into their clothes - hips/abs and are still + 10 pounds up. I don't have any issues with my hips - but Nick has a small head too, so... that might have helped! But, I feel like running all through the pregnancy totally helped me! I have been 5-6 pounds up from pregnancy weight since about 1 week out. I'm not dieting, just eating well and continuing my workouts/running/training!

I've been getting some questions so here is a brief recap.
How I handled the running throughout - a recap for all the future mommies:
I was already running 30-40 miles a week throughout the winter and spring and got pregnant late spring/early summer. My doctor said I was totally fine to continue running as long as I listened to my body. So, I continued to run through fatigue of the first trimester, energy burst of the 2nd trimester - still 30 - 40 miles. I did start being out of breathe in the first few months and my pace crept up, and in the second few, it stayed around the same, but went up at times. There were good days and bad days. I continued long runs on the weekends. The end of the first trimester my knees were a big problematic. Running was the same in the first trimester just slower and more being out of breath. Second trimester - as it got further into the pregnancy, some pains here and there like side stitches, and my achilles was bothering me at times. I took walk breaks whenever I needed it.

The third trimester I was still running, I was getting bigger, and my pace continued to slow. I could feel the baby moving but he wouldn't move when I was running (until the few weeks I'd say- then I could feel him at times when running). I'd get side stitches and need to walk more often than the previous months. Throughout, I was going 10 to 12:30 minute miles up from 7:30 to 9 minute miles before I was pregnant. I kept up the mileage and hit 30 miles almost every week, and dropped some of the longer runs until more towards the end. I did my last long run on Jan 31 of 12 miles at 12:30ish pace, 6 days before Nick was born. My last run of a total of 5.5 miles (did half took a break and did the rest) - the run where I started getting back pains (labor/contractions!) was Wednesday afternoon Feb 4, he was born the morning of Feb 6. It was 11 min mile pace. Running - it could have helped me go into labor 2 weeks early!

It is pretty cool to look back at my mileage and training throughout and confirm that it was all worth it! I feel great, and I recommend staying in shape to any future mama - with approval of your doctor. I was probably one extreme - but I think any working out through the whole thing really helps! I thought my pregnancy was a breeze looking back. I feel like none of the bad things (besides that line down the belly) happened to me. I'd do it over again anyday! And definitely run through it again for sure. Overall - running with some walking mixed in when body not cooperative, being flexible, and slowing down is what I did! 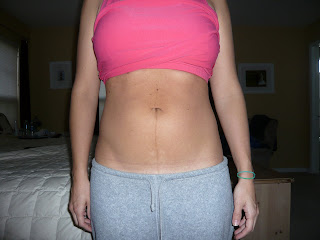