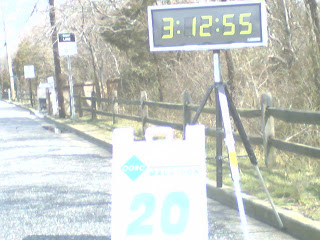 Whew! I am relieved today! and happy. 10 raced, 10 bandit and 20 done! This is kind of long so skip to the bottom if you'd like and answer the question there!

I was actually looking forward to this 20 mile run to sort out my thoughts. I didn't really get anywhere but ran into a colleague and felt that was a mini sign...

Woke up this morning to fog, rain, crap weather. The plan was to do the 10 mile race and continue to run with the marathoners to get in my 20 miles. Bill got up with me (thanks Bill! - we had a crap night - Nick did not want to sleep in the pack and play so we took turns waking up and holding him and falling asleep with him on us) to take me to the start, and I was considering going back home for a few seconds. Pumped, got out of the car and walked to the start. Kind of wanted to cry walking there alone in the rain and questioned what I was doing. Also just been feeling stressed about decision making.

First few miles I was considering texting Bill and telling him to get me at the 10 mile finish. It was raining, cold, windy, and foggy and my right knee was hurting all around - behind it, on the kneecap -everywhere. I thought I was going to be limping just to finish 10. Mile 1 was around 9 minutes. Mile 2 was around 9:30. Mile 3 around 9:30. Then around mile 4, I got this burst of energy, forgot about my knee and started picking people in pink to pass. I'd pass one and then look for the next one. So this game totally worked for me! My knee stopped bothering me. I was rolling along and feeling really good. Probably around mile 5 or 6, still feeling good, I decided I wanted to get a sub 1:30 time. I had no time goal going into it. I took a GU at mile 7, a little more than an hour into it. I thought I could do it and was only 30 seconds off of 9 min mile pace. I started speeding up, and the pink game helped alot! When I hit mile 8, I knew I could push it out for 2 more miles. I started picking other people to pass - guy with no shirt, girl with big butt, and was really doing a good job with it. I think I ran those last two sub 9 and was able to finish somewhere between 1:28 and 1:29. I'll figure out the official time later on. I was really happy!!

I took a break and got my medal for the 10 miler, saw the colleague from work who was running and then kept on going. I was thinking it was probably bad to push it those last few miles since I still had 10 more to go, but I just plugged along. I took another GU around the 2 hour mark and felt pretty good! My pace slowed, I was a little less motivated to care about my time once I wasn't really on the clock, but I felt good! I had some sport beans - dropped about 5 of them on the ground - bad packaging man!! (I was picturing how I could make a better package) and kept drinking my water. I used the fuel belt that I won from Amanda's HBBC! (When I first got this in the mail, I was prego and it was sooo tiny, I thought I would never ever be able to use it, but it actually was really snug and worked great!) I tried not to steal the water from the marathoners but have to admit I took 2 cups of water at 2 stops. Half marathon: around 1:58. Good! I realized around mile 14 that my bib # was a different color than the marathoners so I zipped up my jacket - kind of felt bad! The course was pretty cool, on the boardwalk for a little while and through the streets from shore town to shore town. It was a bit windy, with rain here and there, but not hard rain. Mile 15 - the weather started to lift and sun started coming out. I called Bill at mile 16 to tell him where to meet me and how long I might be. Knowing I was only doing 20 miles made me feel like I had a leg up on the marathoners and I kind of felt bad! But mentally I felt like it was easy and what a great way to get through a 20 mile run with a bunch of other people running, mile markers and water stops. I would totally do that again, even sign up for the marathon and only do 20 maybe? 4 more miles to go, I felt pretty strong! I took a few walk breaks to drink water but other than that I ran and felt good!

Mile 18 I ate 1/2 a cookie dough balance bar - wanted to try this for the actual marathon. It worked ! Mile 19, dropped a water bottle from my belt and bent down to pick it up and ooo.. was pretty stiff. Some guy running by was laughing at me and we chatted for the first half of that mile. Made it to mile 20, ipod still functioning, in good spirits, hydrated and feeling good!

There were a few moments where I considered running the whole thing since I was feeling good. But.. I didn't think it would be the best of ideas with Boston in a few weeks. It was a relief that I felt that way and I feel confident for the big day! I would have been close to a PR had I continued which is awesome! Boston is a bit more challenging - there were a few hills going over bridges and all, but I don't think it will compare to Boston! But I would do this marathon again - it was small and had that small marathon charm with fans here and there with lots of enthusiasm. I'm so used to doing the big ones. I am looking forward to Boston now, maybe I can get a decent time - for me! I hope that I feel that good!

In the end, Bill, Nick, and my parents were waiting for me at mile 20, and I was done! It felt great. I did an ice bath when I got home. I thought hypothermia was going to set in. Warm shower, pump, stretched out and plan to eat lots of food!

Before the race: bread with PB + water!

Ice bath - do you take a warm shower first? Do you totally stretch out before or after? How do you will yourself to get in - that was difficult! How much ice do you use?

Today I ate a power bar in the car, stretched a little before but got in right when I got home with 2 bags of ice, then took a hot shower, stretched more, then ate more.
Posted by N.D. at 1:50 PM