This past week has been kind of hard! After I made the decision all I did was question it and think about it and found myself sad! I think it is one of those grass is greener situations and no matter what I had decided I would have been sad and questioned it. I made the decision that I thought was right and that I thought I would regret less going forward . But here's what I think - it is a very big adjustment and change. I don't know if everyone goes through this, or if it has to do with teaching being such a big part of who I am, and now making room for changes in who I am - now I'm also a mother and this is a big part of my life.

Overall, I just think wow, what a big change it can be for moms, whereas not so much for dads. I just wish more workplaces were more supportive of moms and offering part time work when children are little. For me, the decision was one extreme or the other. It was to choose between resuming my pre-baby life/job which was working 5 days a week and taking alot of work home - papers to grade, lesson plans, etc. I found the time to workout after work, but I still felt that I could have been spending more time with Bill. Now add in a baby, and how will I ever fit in everything that I want to do? I felt like I would try not to bring work home, but ultimately, would feel like a bad teacher and by leaving off Nick at daycare, a bad mother for the lack of time spent with him. I think it will be good for him to go to daycare in the future, but I felt that since he is my first and I don't know what to expect with him growing up in the first year at least, I wanted to experience that. It was a hard decision, and I think in the end I will be glad that I did it, but now, it is a big adjustment period for me. When Bill gets up to leave in the morning, I am jealous of him and want to go to work. I would be happy to have a folder of papers to grade. I think though, that I am forgetting things such as parent phone calls, pointless meetings, IEP meetings, pain in the butt kids, - and just thinking of all of the good things. I was thinking the waste of time things would get me down next year. Anyway, at this point, I am just trying to live with my decision and move forward and figure out what I will do for part-time work and to keep myself stimulated.

Running - was supposed to go do 12 this morning but was severely windy so heading out tomorrow to do that. After the great 20 miler which I feel like I could do every weekend, this week's runs have been kind of a drag and forced. Only 2 weeks to go till Boston! 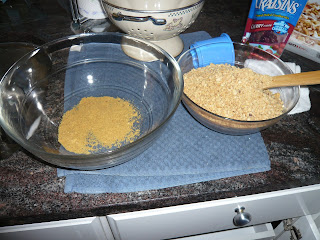 I started attempting to make my own peanut butter but there must be a special tool. It is not liquidy enough and way too dry. I was using a food processor and have to go do some research now.
Posted by N.D. at 3:13 PM