and then I topped this with peanut butter and chocolate chips (not pictured). It kind of melted and got runny. Mmmmmm. 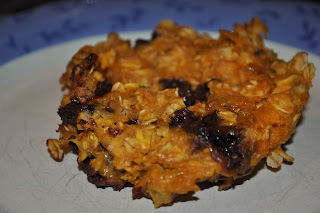 Baby's first muffins (Jessica)
So I made these but they didn't stay together well. Regardless they were absolutely delicious! I need to try again.

Dear Natalie
Thank you for registering for the 36th Marine Corps Marathon held on October 30, 2011.

I'm pretty excited about this and did it without much analyzing and thinking(at all). I know I said I wouldn't sign up for another marathon until I decided I was 100% into it. Well, my sister lives in DC and we've never run a marathon together (we attempted Broad Street -10 miles- a few years ago and at mile 2 she puked in a trashcan and then ended up in the ER in shady area of Philly with an allergic reaction going on.  At the time though, she hadn't really trained for it and was up late the night before and drank red bull I think before running.) I think she'll be in better shape for this after doing her 2nd marathon in May and a handful of races and triathlons before October. I'm really excited to run with her! I think that I can garner up the motivation and my goal is 3:xx:xx right now.

And this morning I finally made it to the Thursday group run with a different group with whom I've never ran. They are a FAST group so besides being sick, other weeks I have wimped out. I showed up today! There were 6 of us.  It felt slower than I thought the first mile, but it was 8:16.  The next two miles were 8:06 and 8:03 and then me and another guy ended up slowing and the others going ahead.
Around 4-5 miles I got a horrible stitch/cramp and wanted to end. I felt bad for the other guy but he didn't seem to mind. It turned out that I used to work with his wife 5 years ago and they have a 21 month old so we had alot to talk about. We ended up doing about 6.3 miles in 52 minutes and then I added on to make 7 miles in just over an hour. It was a good pace and I am so glad that I went!
Posted by N.D. at 8:07 AM