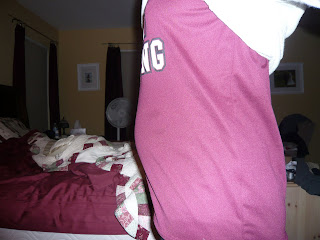 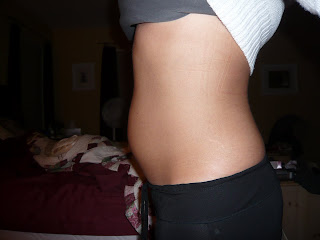 Yea, I'm over the radar now. Booooo. 23 weeks today. No more pretending I guess. I'm not as lucky as Clare, who is only now being noticed at 31 weeks. Seriously.

This week sucked. I don't know what it was, my lack of patience, too many things going on at once, or hormones, but I had too much going on, and too much work to bring home almost every night this week.

Monday was my dr appt and I had to leave yoga early : ( Tuesday I got in a good run, but afterwards I did feel like I overdid it. I paid for that later this week. Wednesday I went to crappy yoga class, and it was indeed crappy, but included some good moves.

The week ended on a real poopy note. Thursday morning I got up to run and my legs felt like were carrying 20 pound weights, and I had some pain that just made it uncomfortable. I planned to run later. I had my "bad" class the last period of the day on Thursday, and really needed to detox. I had an outside run planned with my hatphones winter hat (favorite thing in the world) near school. I started to run and within literally 2 minutes, I had cramping. I had to stop and walk. I was so upset. I totally needed this run. It sounds so stupid, but then I was stuck walking and thinking. It's really stressful to me deciding how much time to take off, and I started thinking about that. Then everytime I have a problem running, I think it is the end, and I won't be running again until March. It is not a good scene. And I have totally scary doubts that I will have problems running Boston 2 months after giving birth since I have no idea what I can expect.

So that was a bad day. This morning I got up & went swimming, and planned to try running after school. I got in 3 miles before I started to feel cramping. It's really frustrating for me. I know it is really stupid, and I'm stopping when I feel it, but it is really sad to me : (

In other news, I got my Boston fundraising page which is here and I'll post on the side link. I'm running for cancer research, which to me is a great cause. I'd love your support ! I promise I'll finish, I just might be walking a bit! But I hope not.