2 weeks later - my psuedo due date 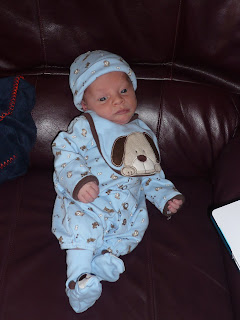 Happy 2 week birthday Nicky!
Today is the due date that I made (it was the 19th but I made it one day later for the better #).
I don't really know what I'm doing as far as anything at all. I'm just going with the flow with running and enjoying the ability to do so. I would really like to swim but I think they said 4 weeks and with chlorine I'm not sure if I should try that before they say to. I do have a treadmill in my basement which is the only way I am running. Risking germs, I don't want to take the little guy to the gym like I was thinking of - didn't think of the germ aspect.

Abs - when do they go back together? They feel weird. Should I be doing ab work?

I got a better start on food today and had pb on an english muffin pre-run. I've ran for 1/2 hour today and I'm taking a break - it doesn't feel that spectacular right now. I was kind of hoping Nick would wake up so I could stop. Haha. I'll try again later.

I'm hoping to have some oatmeal, some soup (thanks for the recommendations) and get in some pasta/veggies later. I kind of miss broccoli and I'm staying away from beans too which were kind of a staple with pasta! I don't want to give lil Nick gas! I need to make sure I'm eating enough. It would be great to have a chef that made us healthy meals.

I'm still ecstatic about the BOB arrival next Thursday. I can't wait to be able to get outside.