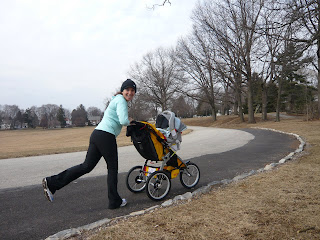 First we'll start with the hungover running. I don't know the last time I was actually drunk - I'm not a big drinker at all except when I have to be the center of attention so I drink a couple glasses of wine to loosen up (engagement party, bridal shower...hence one of the reasons why I didn't have a baby shower), but I do remember in college working out after a night of heavy drinking and what that felt like. Take that, and that is what running on the treadmill this morning felt like. It was awful. I thought I was going to DIE. Everytime I slowed down to walk, it felt worse than running.
I made it through 6 miles in just over an hour, but it was not pretty. Nick was in the boppy next to me... he fell asleep, woke up and took a couple looks around and went back to sleep. Good little guy! Mommy was kind of hoping he'd start crying and need attention as an excuse to lay on the couch next to the treadmill (which I did a few times for mini breaks). Gu - just didn't have the same effect on me as when pregnant. I was downing water like a hungover punk though. 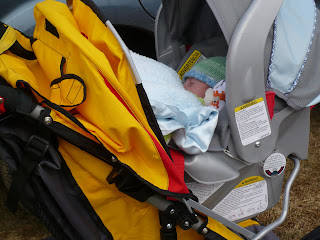 And then.. the BOB! I wanted to get out yesterday and just test it out, but my knees were kind of crappy yesterday and I didn't want to run so I did some elliptical instead. I think I am going to have more OFF days though, just to get in some rest. So I took the little guy to this loop park by our house - had to drive there. We call it the Paoli Massacre - it has some history behind it. I just think of it as a 1/2 mile loop.

This hill seemed enormous
Unloaded the bob and plopped Nick in w/ his carseat. I wish I could have videotaped this experience. As soon as we started moving, I was in my glory. It was sooo great! The thing is pretty versatile over bumps so that he wasn't bouncing all around, and it was a very smooth run! The handlebars were in a great position for me, and I really didn't feel like it was that much more effort at all except going up hills, which are already difficult. I basically just wanted to try it out since I already ran this morning so I did 2 miles. It was great! I love the thing! Nick did not wake up once! One thing I have to try out again was making a U turn - this didn't seem to easy, so I 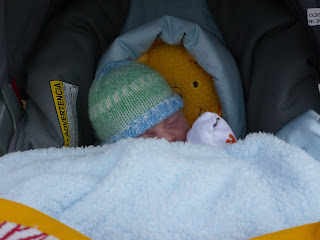 don't know if there is an easy way to turn around. Other than that, it was tough over bumps and kept the little one safe. He was all bundled up and cozy. I felt like a complete loser taking pictures of myself when I realized there was someone else walking nearby. Hah!

I am having a decent day of eating. Abby gave me the idea of putting the cinnamon naturally nutty (which is kind of a strong flavor and not my favorite of the flavors) into oatmeal! So I tried it yesterday with wheat germ and flaxseed and some brown sugar. IT was good stuff! So I had that this morning after a powerbar with some milk. Then I ordered from Diamond Organics, a colleague had given me a gift certificate to this place and it is WICKED expensive because delivery charges are minimum $25 (overnighted) and it came today. I have veggie crudite (which is veggies and a tofu dip), some grain veggie burgers, and then 2 single serving dinners for Bill. I was more excited about the above 2 things. I had some veggies and dip and a burger (it was decent but not worth its price). 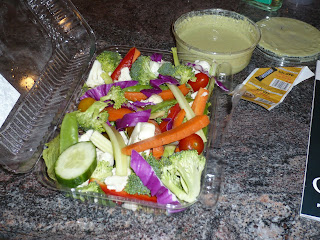 I'm really pretty wiped out. Everything is starting to catch up to me, so I may run on alternate days and for now maybe just rest the other days! 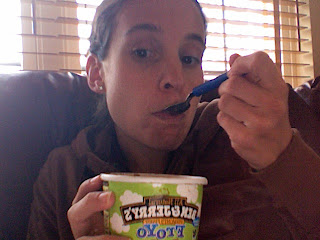