I got up early this morning to make it to the Y when it opened at 5 so that I could get back home in time to feed Nick around 6:30. The only way I was up was because Nick must have been having a dream and cried around 4:15. (and I'm coaching a camp this week in the mornings so I wanted to get the workout out of the way so I wouldn't feel bad bringing Nick to daycare after I'm already leaving him in the morning). So I tried to doze for a little and wake up in time to go to the Y for once.. and I did. I was surprised at how many people were actually there. I swam 2000 yds, biked 4 miles and ran 2. My legs were tired by the end. But the idea of a mini tri workout changes things up for me. It kind of took too long though, I would have liked to run a little longer, maybe even bike too. I'm excited to do an outdoor bike at some point too. When I was down swimming, I put my suit in one of those water extractor machines and it got completely stuck and ruined. All ripped up. That sucked bigtime. It was great, actually, and felt good, to be up and working out at that hour (like in the non-pregnant/non baby days). 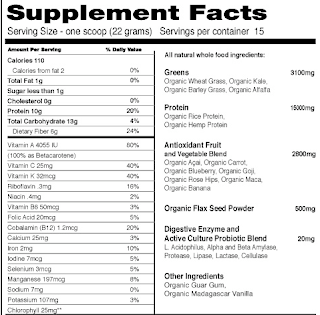 Click to enlarge - amazing meal nutritional facts
Amazing Meal: original blend, chocolate infusion and pomegranate mango infusion
My favorite was the chocolate, "A blend of greens, protein, fruits & vegetables infused with chocolate" it tasted like chocolate milk. The other 2 added to the flavor of the smoothie, but nothing crazy. They are chock full of health benefits, fruits and veggies! I used these after a hard run and they were great in a recovery smoothie! They have 110 calories and 10g of protein.

Amazing GREEN superfood:
"One serving gives you the antioxidant equivalent of 7 servings of fruits and vegetables and helps you hit your daily quota. "

blend of tons of antioxidants,fruits and veggies. My favorite two were the berry flavor and chocolate. The berry really added to my fruit smoothie and chocolate was the chocolate milk taste again! They also have the superfood for kids which is awesome. I used these in my morning smoothie for 30 calories and a slew of benefits!

Organic Wheat Grass - I liked the flavor of this. 35 calories and tons of vitamins and minerals to share! :)


Thoughts: I would probably benefit most from the 30 calorie smoothies morning and/or afternoon as a boost to my smoothie! The meals were good for recovery food. I'm not sold on the bars, but I am used to sugary ones like balance bars and luna bars. I would eat them if I was hungry but they wouldn't be my first choice! I'd rather have a smoothie! I would choose the chocolate or berry flavors. Also, perhaps even more fun than the drink mixes is the cup that you can buy to go with it - I have been using it not only for smoothies but also for water! I love the little spout to drink from, like a water bottle. It makes me drink more water! I'm going to order some of the drink mix so that I am one up on my fruits and veggies everyday! 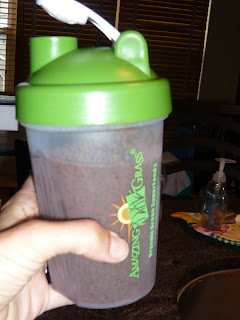 Want to try it out? Bid on some samples on Monday!
You can check all of these out at amazing grass. Amazon has them too!


Nike+
My battery died a long time ago. Maybe before Nick was born, or shortly after. I brought it to the apple store where I was told I had to get a whole new one. They don't have battery replacements? I liked the Nike+ especially when Paula Radcliffe came on to say good job to me. But I'm not buying a new one.
Choc Chip Cookie Dough - Breyers
I like how Breyers ice cream is all natural and it is tasty. However, the chocolate chip cookie dough flavor is missing so much cookie dough. They might as well call it vanilla. My sister brought me home some ice cream from a local place on the way home from DC to home on her move and it was chock full of cookie dough. Then I get some breyers for Bill since I won't share my local ice cream pint (selfish and mean) and that was so disappointing.
Posted by N.D. at 7:42 AM