Today was my seventh Broad Street Run - it's my favorite of all the races and today I got to experience the race in a different way since I wasn't racing! I hopped in to the second corral as they passed because I knew it was going to take me a LONG time and I didn't want more of a delayed start from the corrals. I tried to stay out of everyone's way to the side of the road.  Anyone who started in a later corral, how did you feel about the corrals? I ran the first 2 miles, I felt really good, I was around 10:30 minute miles which was nice. But it was hot - I was starting to get warm quickly, so I started alternating walking and jogging.

Around mile 3, I got what I call the pregnancy side stitch - either the baby is pushing out saying what the hell is going on? or just in a position that makes it uncomfortable to speed walk or run. I spent alot of time walking slowly and taking videos and pictures. I was trying to master the speed walk that looks like a jog - I felt like it was less pressure and would get me to the finish a little bit quicker than my slow walk. My halfway point (5 miles) was 1:05.  Around City Hall was exciting but I definitely had a cramp and was walking very slowly. I shook Gov. Rendell's hand just after City Hall for the first time!

I basically walked/speed walked most of the miles until mile 8 when I tried to run (meaning jog) it in and finish. I drank plenty of water, went under the sprinklers (so refreshing!) and didn't feel really warm until the very end. It was hot out there, maybe mid 80s? I finished in 2:17, a pace of 13:42. I really enjoyed the race-though I do think they should have a pregnant division. :) Nick was a trooper, as were Bill and my parents. It was a long morning for them, especially since it took an hour longer than what they are used to. I really appreciate their support!

Did you participate? Check out my article on examiner w/ video that I took! 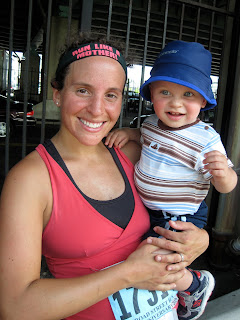 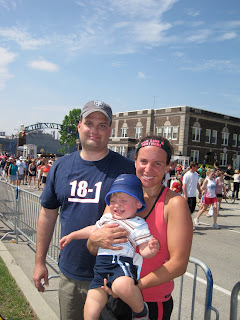 nick was done and wanted down!

28 weeks
Not much to report - lots of  movement from the baby, still trucking along at a jog/walk pace, swimming and need to incorporate more yoga. I feel like I'm carrying higher, I'm praying my belly button doesn't pop out and thankful for a healthy pregnancy so far.  I have no mother's instinct whether it is a girl or boy, I keep going back and forth. I'm also back and forth on the names, very fickle on them!
Coconut milk - I bought a can of this - they didn't have so delicious in my grocery store and this seems a lot thicker than a milk I can drink. What can I do with it?