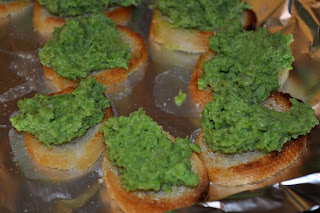 I saw this toast recipe in Parents magazine and made it. It was tasty!  I'd prefer to eat cheese, bread and butter all day long so this was a good trade off.

*Running has been almost spectacular this week - I haven't had many issues and have felt good. I'm just running on the treadmill at this point. I'm thankful for it feeling good!

* I bought Nick the little car - ok - where is the legit handle?? It's an opening but I was expecting a real handle. In any case, he enjoyed it. The floorboard is in for now. It was $40 at amazon. 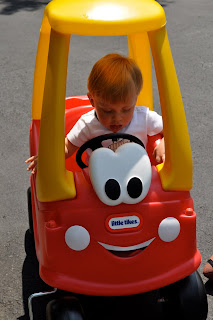 * The baby is in such an uncomfortable position right now. I swear it is a girl that is tormenting me like I torment my mom.  Right above my belly button there is just this sore spot and pushing out. I don't know what it is(hand/foot??), but it is not a comfortable thing. Monday marks 7 months, I cannot believe it.

*I've been making fudgie babies and having them little by little as crumbles instead of forming them into balls. It's totally a dessert type thing but I eat it first thing in the morning since I can't have too much caffeine and especially not later in the day.

*reading food blogs, especially dessert recipes makes me hungry and makes me want to make things. I like the ones where it is mostly healthy stuff and that is what I am going to focus on posting here too!


* I'm totally unmotivated to make dinner most nights. I keep recycling the same recipes and I need something new!

* I'm game for a triathlon next spring. I want to do an Olympic distance one. Where to even start looking?

*I've already started thinking about how I am going to manage working out when I have 2 kids.  I guess nap time is going to be huge.

* I think I am starting to transition Nick to 1 nap. He's 15 months + 1 week. When did you make the switch? I'm torn whether I should do it or not but he's not consistent with the length of his 2 naps anymore and gets up around 630 - I feel like maybe he'd sleep longer in the mornings once he goes to the one nap. Torn?!
Posted by N.D. at 8:27 PM