When I was pregnant with Nick, I was also training for Boston, so I kept my mileage up around 30 miles a week, no matter how dreadful or how long it took to complete that. Up until 30 weeks, I have been able to hit 30 miles almost every week until last week when I got sick and that was cut in half. Usually my week starts on Tuesday and I have been doing 5 miles in the morning before Nick gets up and 5 in the later morning or afternoon. This morning it didn't feel the best, and I kind of wasn't digging doing another 5, so I did another 1 while Nick was napping. I started thinking what my mileage should be - whatever I feel like doing each week?  Maybe the 30 miles is forcing me to run, but it is also giving me a goal. I need some kind of goal for each week to strive for - I don't know what my goal should be.  What should I aim for?

Groceries. I was being so good about the food shopping and keeping the costs down as much as possible until I started reading the organic produce articles and started buying more and more organic foods. For the first time this month, our grocery bill went over $450, it had been around $350-400 for a few months. I'm bummed!

Nick has become kind of a pain eater!  One thing I just started giving him is the Greens + powder as a smoothie with frozen bananas and frozen berries - he seems to dig it.  I think it is ok for him to eat.   I also have a box of Amazing Grass pb protein bars around because once I got pregnant I decided they tasted like cardboard. Does anyone else feel that way? I used to think they were delicious! Now it's a struggle to get them down - but Nick likes them!  I have to go get the ones that aren't coated in chocolate as well as some kids powder for the Amazing Grass.  At least he's getting in some nutrients.
He'll eat peanut butter on crackers, he ate oatmeal this morning, bananas most of the time... but he's getting so picky!

Remember I mentioned I won a prize for answering a blog comment - 6 words - what did Broad Street mean to you?  It was a random drawing but my 6 words were: bonding experience with 30,000 other runners.  I went to get my prize today from Philadelphia Runner and it was awesome! I got to pick out a new pair of sneakers and the guy working looked at how I walked and my shoes and told me that I overpronate. The last time I went they told me to get neutral shoes but I think my stride is totally different from being pregnant. This time I picked out stability shoes - Mizuno Wave Nirvana 6. I liked the color over a different pair that was bright green, though I liked them too! 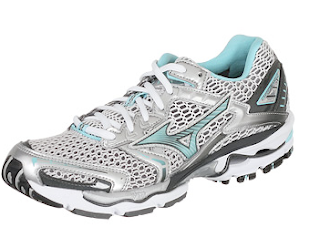 I was trying to find a matching outfit, but that wasn't working out so much for me so I got a PUMA shirt - tank top w/ built in bra - I don't have any of these and it's sparkly at the bottom - big fan! It matches the shoes :)  It was funny trying this stuff on with a big belly - hopefully soon I can look normal wearing it. 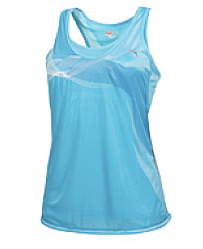 and  a pair of socks (Feetures) and Asics "Favorite Short."   Have you heard of Feetures socks? I hadn't so I figured I'd try them. I'll let you know what I think! 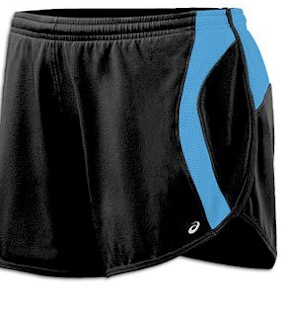 I was looking for something to match the shirt but no luck. Regardless, I loved being able to go in and just pick out whatever I wanted, how fun is that? Might be the coolest prize (besides straight up money) that I've ever received!! Thank you Philadelphia Runner and Phillymag.com! 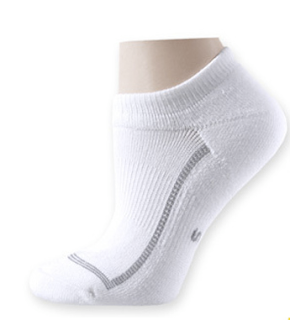