I think the decline of my running came the week after the Philly Distance Run. We held under 9 min pace for that race and I felt comfortable for it. Then my hamstring flared up and I could not run the entire week after. When I came back from that, it was slowly and I had to go get my hamstring worked on every week. Now I'm dealing with discomfort after every run that lasts the entire rest of the day but I can run comfortably for the most part. The pain is the worst when I'm driving or sitting still (which I don't do much!).  I feel like I can't get back to a faster pace and I'm working against myself since my body is going the other way (decline,slowing) but it would be real nice to run a better time in Philly than MCM?

I was able to run 7 miles this morning on the treadmill and it felt really good! But so slow! I could run 7 miles in an hour at one point, and it took me over an hour and 10 minutes :( Kind of frustrating. I made a friend at the gym. Do you talk to people at the gym? I need to socialize in the morning. At the Y, it was the same early morning crew so I knew people and knew the instructors. I joined a new gym for the days I'm not swimming since they were running a special for the rest of the year (and hopefully after that I can cancel it!) I don't know anyone, but this morning the guy next to me asked me a question about signing up for the machines - you have to do that to "reserve" the time you are on it. Then we became running buddies, haha. Too bad he was traveling for business.  Older guy, recreational runner. I'm starving for interaction, even when I'm running, so it made the time go by quicker. But all in all it felt good anyway! It was definitely frustrating since he started after me and was done before me - and we both did 7 miles, but what can you do? 7 miles felt really good!

So the first 12 weeks were different this time. Since I was in top shape and training for the triathlon and marathon, this wasn't in my original plan, and I did cry when I found out.  For the full story, I thought I was in the clear, then realized I wasn't and that I ovulate super late. I took the Plan B pill but this baby pulled through. I think I feel overwhelmed enough with Nick(will be 3 in Feb) - low key and sweet, and Kara( will be 1.5 in January) - demanding, mama's girl, but sweet! so it has been hard to swallow but I know babies bring so much joy and it will be great for the kids to be close in age (17 months between Nick and Kara, 22 months between Kara and the new sibling:) ) As far as my well being?? We'll see how that goes! I wish that I could share my fertility because I know so many people who want to be pregnant and jump through a million hoops to get there or just can't get pregnant. I can't even imagine.

Anyway, as far as the first trimester... I had some nausea this time around, I was napping in the afternoons very often, I couldn't keep my eyes open! I didn't really have aversions, just foods that I saw and wanted right away!  With Nick and Kara, I wanted butter, cheese, and toast/english muffins, and I could not look at veggies the first trimester. I'm going strong on my veggies and was really into cheese the first few weeks, and cheese hoagies too! Peanut butter was take it or leave it for a couple of weeks there, and I was eating my Amazing Grass Chocolate with coconut oil every day!  Now, I have weekly/monthly cravings - the chocolate and mint is a strong one, mexican food - black beans, cheese, sour cream, guacamole.  Starting at Halloween with the candy, I feel like I have been shoving my face and not stopping when I'm full. I feel like I am now obviously pregnant (at least at swimming). I need to chill out a bit!

I feel like I've been pregnant for the last 3 years straight and everytime things start getting easier, bam! I'm pregnant again. I guess they'll all be close in age and have a good time. I'm questioning how you give enough time to each child, because I've always wanted 4 kids and I feel like giving two the attention they need is a challenge!  I guess I'll see after 3.

Some ultrasounds pics! Due date May 3. I'm around 15 weeks, I think. I'm not really keeping track! 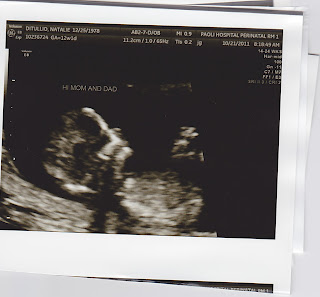 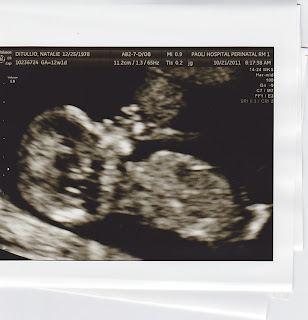