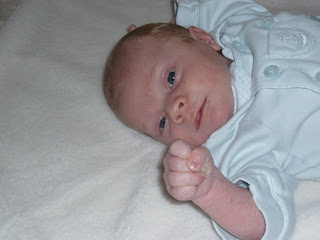 Today to celebrate Nick's one month birthday and the weather, I wanted to go do my long run at Valley Forge. I tried planning it ahead of time, but then it was a little chilly this morning so plan #1 was bagged. Also, I just felt like staring at him this morning when we got up! And playing. I think I took a bizillion pictures of him in the same pose.

Instead I ran on the treadmill while he slept (on his tummy!), and got in 7.3 miles. 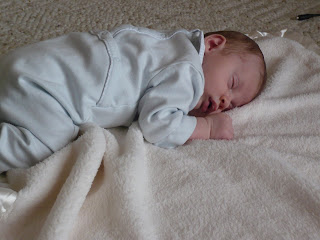 He woke up, he ate, and I packed him up to go to Valley Forge 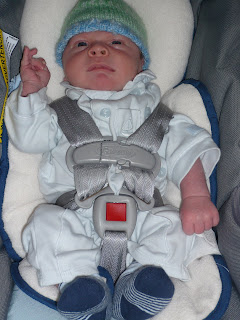 for one loop (5 or 5.5 miles?) to get in a total of 12. It wasn't really a long run because there was a break in between, but I'll get in some long ones in the weeks to come.

I realized when I got there I wore the wrong shoes - my nike+ is on my Mizunos and I wore the Asics. I've been alternating them pretty well.

Valley Forge: This was like a resistance training workout. Holy Hills! First, it was not nap time yet, so he was not too happy to be strapped into his carseat. He fell asleep once in the car and when I moved him into the stroller he stayed asleep. 5 minutes into running he started wailing. I took him out and held him for a little bit, 2 cute little kids came up to him and said 'look at the baby!' They were really cute. 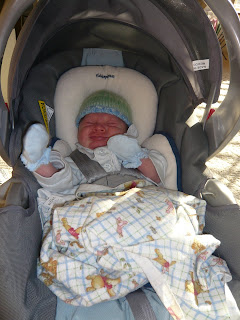 Thank you Mama Simmons - the snugglie was AWESOME!

I crossed my fingers and put him back in the stroller and he was in and out, kind of looking around, and finally dosed off. 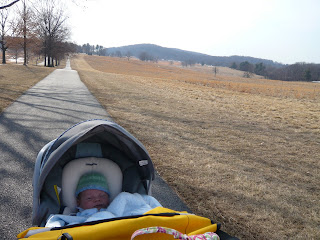 I tackled the loop. It isn't too bad for the first part... but then the hills are amazing. Pushing the stroller and running those hills, I was sweating my a$$ off!! It was BEAUTIFUL out by the way. I was running so slow and panting. I think by the end I covered about 5 to 5.5 miles and it took me 57 minutes. I would do it again - it was great training, but I think my legs and upper back from pushing the stroller are going to be quite sore tomorrow! 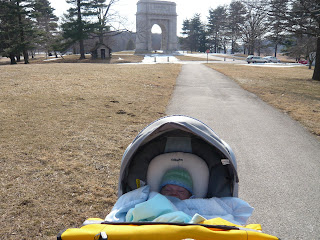 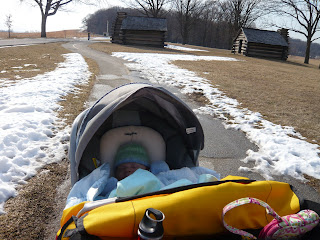 Things learned:
I can't schedule a long run.
I probably won't be running outside with anyone WITH the stroller anytime soon!
I can go to VF and get a great hill workout for Heartbreak Hill!
Running hills + the BOB is really tiring!
It makes it much more interesting and fun running with a little buddy! Even when he's sleeping!
Running with baby inside w/ my sister is easier than running with a stroller, carseat and baby!
Posted by N.D. at 5:20 PM