Today was a busy day! Started with swimming - I dropped Nick in the infant room at the Y (Joined yesterday after weeks of deliberation) - I was sweating horribly doing this. Right decision staying home. I went swimming on Saturday with my sister for the first time since before Nick was born and again today. After the marathon when I have post marathon blues, I'll be swimming it up!!

We met Abby for a bagel (instead of a run!), stopped off at the Head Nut (local nut/dried fruit/candy store), stopped by my grandmom's and went for a walk.

As soon as Nick was fed when I got home from the bagel and grandmom trip, I dug into the nuts and made some nut butters. I started with pecan which became an obsession from reading this blog and more specifically looking at the picture! Then on to the peanut and the almond. The pecan was really smooth and spreadable. The other 2 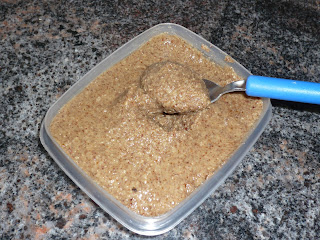 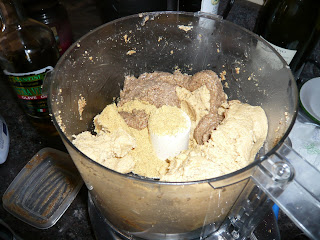 were really rough and dry. What did I do next - I took half of the pecan and mixed it in with the peanuts and the same with the other half with the almonds. The result - spreadable perfect nut butters. I added vanilla and flaxseeds to the almond butter and it is divine. I forgot the vanilla in the peanut butter but added flax. Nick was my little helper and watched my every move! : ) It was so cute 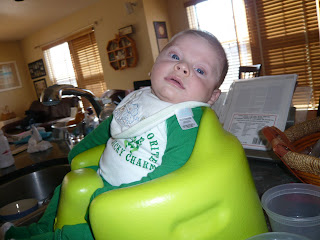 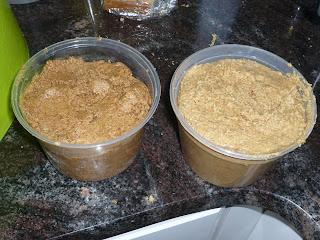 Here are the final butters. The one on the right is named AbmondPeacnut Butter and on the left is BePeacNut butter. They're named after Abby and Bess - Abby who inspires me with healthy eating and running and Bess who reminded me of the Head Nut which will be my new shopping expedition. I think I need better names but that's ok. Just for starters.

Maybe I will start a company of nut butters with my giant baby on the jar.
Would you buy my butters? 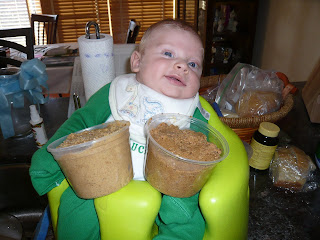 Here is the recipe for the rosemary bread. I might need to make more for the weekend!
Why cut fat the days leading up to a marathon? I don't even know - does anyone else? I read it in a coaches email for the Dana Farber team!

Tomorrow's thing - which includes drinking water, resting and cutting fat, will be positive thoughts. I'm not sure if I will get a chance to post before we pack up and leave tomorrow night. Since I'm doing all this prep (which I haven't done in a while since my last marathon was November 2007) I am starting to get nervous. I don't want to be nervous because I do so much better without that! So.. we're working on positive no pressure thoughts!

Here is a Stonyfield Giveaway! I'll have a review on their greek yogurt coming in the future!
Posted by N.D. at 4:32 PM