and the madness continues!

I have made it without going to the supermarket! There are some serious staples that we need like milk, eggs, some veggie broth would be fantastic to make some soup... how cold is it out? Brrrr! But for now, we're eating tons of veggies, beans and grains. Last night we had kale and beans, a panzanella type salad (wish I took a picture, it was so good) - cut up zucchini, peppers, fennel, cucumbers, add some olive oil and your choice of vinegar and toast some bread with olive oil to make croutons. Toss them all together. It was great! Tonight I made tomato & sweet potato soup and green beans. All that is left is asparagus of the veggies - it's a free for all for the weekend if we don't head to CT! I'll have to go to the store I think! We have tons of bread. Foodbuzz sent 2 loaves of bread to try out and I shopped at the entenmanns outlet a while back and loaded up on whole grain bread! 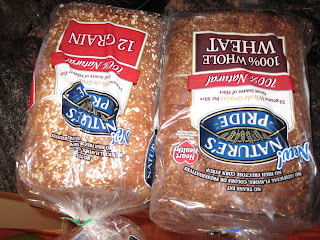 Today was the first day I did not have a hot cereal breakfast (oats, bulgur, quinoa, etc) in a LONG time. It was good. I'm out of bulgur and oats! I should probably get away from that anyway since I add almond butter to it and eat some out of the jar too. Instead I had kashi go lean (I eat it in smaller quantities now), cranberries and almonds. Billie made a good point in saying that I can do this now but once I have little munchkin's real dinner to worry about, it might be a tad harder! I plan on him eating mostly what we eat, but he'll need more protein!
Posted by N.D. at 2:56 PM