One day I started taking pictures of everything that I was eating but never posted it. Here are some eats! 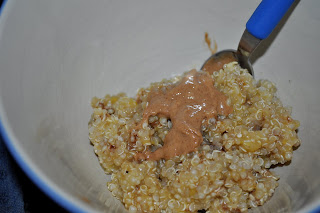 Quinoa w/ squash (nice to have pureed stuff around!),
agave, cinnamon and pb on top! 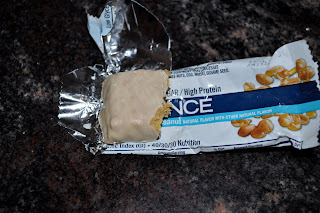 1/2 a balance bar (1/4 is pictured)
These are now out of my house for good!
TOo many ingredients and too processed. 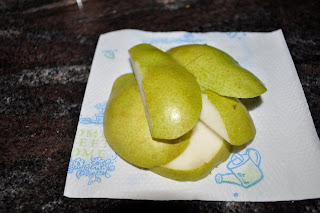 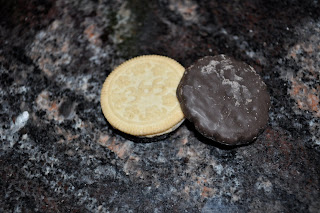 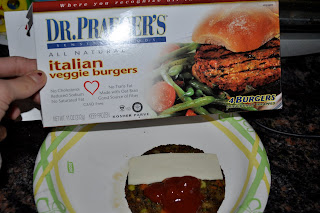 Dr Praegers! with 1/2 a slice of cheese and ketchup 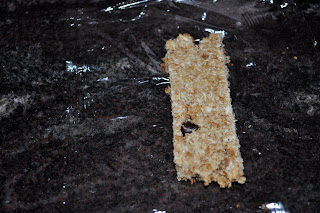 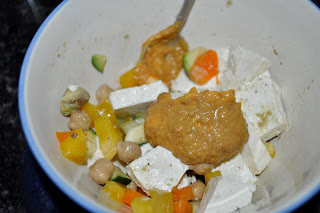 peppers, zucchini, avocado, chick peas, tofu and hummus/nutritional yeast
YUM - this was so tasty and I added in croutons with Ezekial bread :)

Now I basically only took pictures until mid afternoon and then forgot -
so any dessert that I ate isn't on here, as well as evening snacks and dinner.

Cooking for Nick is so enjoyable and fun these days -
he eats mostly whatever we are eating so I'll make extra effort to make things with veggies for us.
Whenever I am trying to make something in the kitchen he comes over and wants whatever it is.
I feel like he could eat ALL day long. I just have him eating 3 meals a day with the milk a few hours later before naps. Maybe I should put some snacks in there too but first I want to get the milk drinking down!

Barley Kale Gratin (adapted from Vegetarian Cooking for Everyone)
2/3 cup barley
1 large bunch kale
2 T. butter
3 T. whole wheat flour
1 1/2 c vegetable stock
1/4 to 1/2 cup mozzarella cheese
Boil 1 quart water and cook the kale (pick leaves off of stems for cooking) for 8-10 minutes till tender. Drain the kale and puree with 1/4 c of the cooking water till smooth. Add the barley to 1 qt boiling water and simmer uncovered until tender, around 30 minutes. 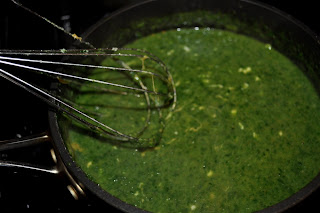 The sauce w/ the kale 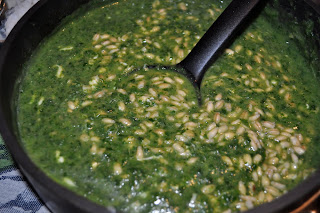 Added in the barley!

Preheat oven to 375, melt the butter in a small saucepan, whisk in the flour, then add veggie broth. Cook until thick - stir constantly. Combine all seasonings and transfer to a buttered baking dish.

Bake until browned on top, 30 minutes.

Ok - this picture does NOT do it any justice at all - it was REALLY tasty!
Kale is a super veggie! 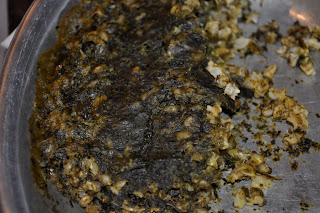 Sippy Cup - we are transitioning from Bottle to sippy cup and today is day 3 no bottles. The first 2 days were kind of tough, Nick drank only about 8 ounces, maybe 10. Today he was up to 15 - we are getting there. Still, though, he's drinking them before naps and before bed (from the sippy cup). Once we get the sippy down, I think we can move to just drinking it throughout the day? How do you do it with the milk in the cup?

It's the last week of the month, and my grocery spending this month has been $351. I was hoping for 250-300, but I did reduce it. I will not shop the rest of the week! I'm going to keep trying this for next month and try to keep it at 250-300! I did well but had to spend a certain amount at Trader Joe's to get money back this month for a special offer.
Posted by N.D. at 6:31 PM