One of those swims

Today, I had one of those swims where I lost track of the time and realized I was swimming longer than I planned to. I usually go for 45 minutes and leave Nick at the daycare. More than that usually makes it difficult to get home in time for him to eat and would make the car ride home tricky. When I dropped Nick off today, it was shortly after he ate, and he was asleep. I was planning on 30 minutes today because I was so unmotivated on Saturday, I didn't know if I would really be feeling it. I followed the workout on the board from this morning's masters workout. I looked at my watch the first time and 27 minutes had passed. I kept going. Next time I looked 40 minutes were done! And the next time 47 - so I just kept going until I did 3000 yds. It took me around 55 minutes.

Last year swimming at LM with the Masters, we could do that in about 45 minutes. It would help alot if I could swim with people, but it was a good workout for today! I finished it off with Jillian level 2 - how many levels are there of this? I only do either level 1 or level 2 once a week. I feel like they are the same difficulty and it helps me to lift when I might not do so. 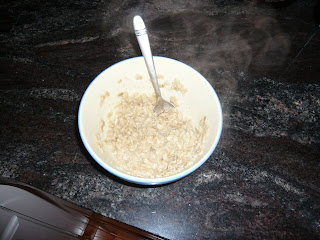 Here's my oatmeal w/ a 1/2 tbs peanut butter, some flax, mystery grain and cinnamon.
After that I had my kashi with a few almonds. I'm out of cranberries and it made a difference!
Lunch was a la tortilla wrap w/ spinach frittata.
I had my berry smoothie w/ banana and protein powder and I've had some chocolate today and hard candy.
Dinner will probably be leftovers from last night or a veggie burger and some mushrooms.

I followed up on my letter to the sup't from last week, (I hadn't heard a thing), and they said they were looking into it - which could be good.

As soon as I thought about it, leaving Nick a few days a week, I was like, oh boy, what did I get myself into? But it would be a good thing. Right now, I decided, as much as I miss work, I'm living a life of luxury, kind of. I have no real stress in my life and it is so rewarding to spend the day with little Nick! I was thinking of having the first 2 kids pretty close together, like a year or year and a half. But this is fun and not chaos yet, so I might spread those 2 out a bit more than I thought to enjoy this more!