Last night I barely slept. Ever since signing up for this race - I wanted to do one with my sister - I was afraid of drowning. There was the man that died last summer in the sprint race (drowned in the water) and Fran Crippen who died in the open water swim out of the country last October. I was freaking out and also nervous about the bike. Basically I signed up for the Olympic but planned to switch to the Sprint at the expo.   I kind of really wanted to do the Olympic distance but was chickening out of it because I didn't put in the training for the bike. I haven't been on the bike for 3 weeks and my training has consisted of 2 spin classes a week.  On Thursday I was waffling and then Thursday night, Kara was up for 2 hours in the middle of the night. I woke up on Friday to go swimming and decided there was absolutely no way I was waking up on Saturday to do a race.  The Olympic it was! I'd like to thank Andrea who told me to pick the one that was going to be a challenge, my sister who tried to make me feel at ease about the whole thing, Mama Simmons who didn't doubt I could do the distance and Denise who told me to go for it!  I was nervous but Clare had the same mindset thought that I was going to go in with - do well on the swim, survive the bike and give it whatever I had left for the run.


On Friday night, Bill and I were celebrating our 6th anniversary in the city for dinner. We dropped off the kids and I went to get my race packet. That's when I became officially excited!  We had a great dinner and anniversary day (yesterday) sans kids. It was so fun, I did not want to pick them up :)  I slept in and got my rest on Saturday and did a bunch of errands but no training/exercise.

I woke up this morning around 4 and got up around 4:30, had a piece of toast with butter + peanut butter and a quarter of a waffle that I made the kids last night and drank some water.  I left the house around 4:50 and got to the Please Touch Museum area around 5:15. I biked to the transition area and kind of got excited on the bike, it felt good.  I met my sister at the transition area right after I got marked and she helped me set up everything and gave me tips. It was so great having her there!  We got all set up and got on a bus and got to the start. This part I did not like - it was so much waiting and standing around. The more time that passed, the more nervous I was getting.

We ran into a kid from growing up so it was nice to talk to him and not think about the race.  My sister was 2 waves before me - 10 minutes - and I didn't like being alone either!  When I got in the water I went right to the buoy as far to the right /end as you could go. There was a scuba diver both on the dock and at the buoy and that scared the crap out of me. I was almost hyperventilating and having a  minor anxiety attack in the water and couldn't catch my breathe but calmed down and we started.

My heart was still racing when I started swimming, but it was all open water ahead. I'm a strong swimmer and I feel like there were only a couple of people in my wave ahead of me.  I felt like I never really got into a rhythm and once we caught up to the other waves,  I was breathing every stroke and looking up because I didn't want to get kicked by anyone and didn't want to veer off course. I feel like I was all over the place on the swim and that I could do better with it, but it was my first open water swim so I think it went ok.  My legs were tired after!

Transition 1 - way too long 3:46. I was taking my sweet old time I guess once I got to my spot. I also don't have bike shoes and had to tie my shoes and all that. 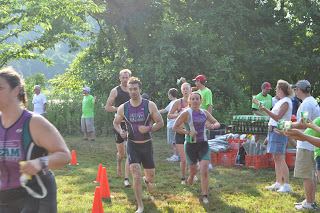 Off to the bike - I really liked the course! It was 2 loops all around Kelly Drive/MLK Drive/ Lemon Hill, Strawberry Mansion and across Falls Bridge. My legs were tired as soon as I started = BAD! I was just enjoying it really and the time flew by. My estimate was that it was going to take 2 hours (for 26 miles) - I'm that slow, yes! And it took me 1:36. I really wasn't even looking at my watch - I didn't want to know. It was a gorgeous day and I was just enjoying it. That was my goal.  During the bike, I took in the most water on the second loop. On the first loop, I ate about 3 Clif Blocks and on the second one a GU.  I definitely needed to fuel on the second loop and felt like that went really well.

My transition to run really wasn't that bad - same shoes, deciding if I needed anything - I didn't.  My mom spotted me at this point and was yelling GO GO GO! I couldn't even think straight and just ran out of there, haha! Thanks Mom, I think you made me just get on with it. 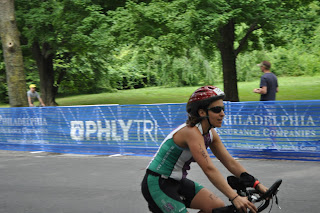 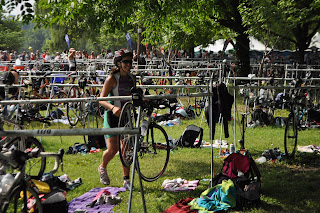 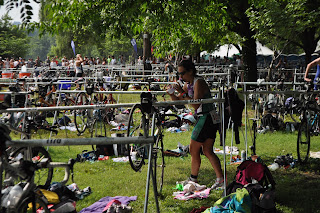 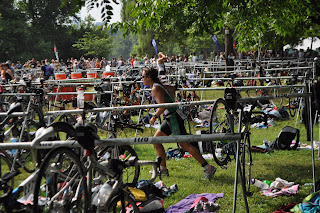 Off to the run - I felt like I was not going fast at all. I was passing people left and right but refused to look at my watch, I just wanted to run and finish and not put pressure on myself.  Here were my Garmin splits below, haha, major pyramid slowdown!

I think I could have gone faster. I feel like I never know how much to push myself before I'm overexerting myself, and I don't want to pass out and die at the finish. Would a heart rate monitor help with that? 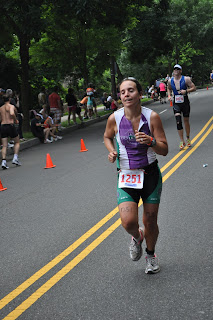 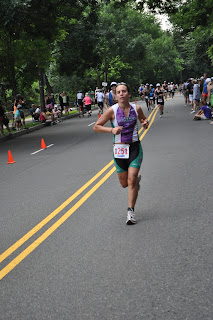 For the last 1/2 mile, my sister, having finished like 20 minutes before me, came back to run with me. Are you serious? So sweet! I would have been sitting around dieing probably. I felt good when I finished, and the whole time never felt like I was going to die or miserable. 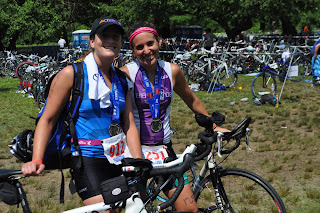 I had a fun day! The weather was beautiful, I was thrilled to finish, and I got to be there while my sister PRed by 13 minutes - awesome!! I could totally see myself doing more of these.  Now if I get serious, I need a bike (I've been borrowing Abby's bike!), bike shoes and some cool looking attire. My sister gave me her old TNT gear to wear. The medal is really cool too - more cool than any running one that I have.

Thank you to my sister for guiding me through all of this !

Don't think I'd EVER want to do an IM unless it was somewhere ridiculously awesome (hawaii?)
Would have loved to do a 5k instead of 10k
Need to improve on the bike and work on open water swim
Was wondering why anyone would ever want to run a marathon, ha!  This was so much more fun!