It's a yucky day out there! I opted to run on the treadmill, it became a Saturday morning routine back in January, where I'd watch Seinfeld DVDs and do my long run. I can truck through it, get water and gels when I need them, and the bathroom is a few steps away : ) I know running outside is so much better - and easier mentally, but sometimes to get a run done, you do what you have to do! I suspect I'll be using the treadmill often over the next 6+ months. I only had time for an hour and a half since we were heading to CT to the in laws so I did 10.33 in 1:30. It wasn't bad except for the gizillion stops to go the bathroom. I ran it on a 2-3 incline most of the time, which was good. Need to make sure another baby isn't forming in my bum! And the incline helps with training for races. In my head I thought I could do another 3 when I got to CT at some point this afternoon, because my goal was at LEAST 13. I had wanted to do the 18 tomorrow but 13 is fine for my long run this weekend. It is nasty out - humid, misting, yuck - but I kind of like running in this kind of weather. Take out the humidity - I like the mist or light rain to run in. So I did about 3, there are lots of hills around where my in laws live, so it was slow! But I felt like I was moving.

Here is something that I think is funny. My inlaws have a little dog. It is small and really cute. Around the house they have baby gates up to keep it from going into the living room and upstairs. Is this normal? I have no patience as a normal person - but as a pregnant italian woman, you can imagine my patience level. I have negative patience. I usually want to kick these gates down - seriously, I don't feel like climbing over them! They are totally not in the way until I want to go into a different room or upstairs but for real, this can't be normal. Let the dog just roam around, otherwise just don't get one if it isn't allowed in 1/2 the house! Wish I had my camera for that one.

The last pic I took I am posting. I feel incredibly unattractive already. I can't imagine what is going to happen in the coming 21 weeks. I didn't have a good body image going in since my family has a history of being fat, and I've been overweight before. Prior to getting pregs, I knew I could control it by running and working out like a champ, and eating well, but now, I KNOW I'm not getting fat, but still. It is terribly hard for me to handle this! And this is nothing compared to what is going to happen! I foresee many tearful days ahead : ( 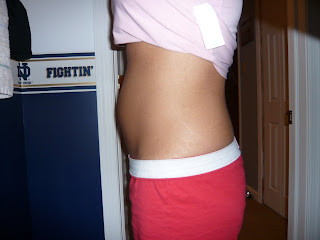