My new toy, dinners and finding your path

I first saw the milk frother tool on Heather's blog and thought it was a great idea! A few months later, less than a week after going to a coffee shop after a training session and ordering a hot tea with steamed milk, I ordered this bad boy!  I love it! It doubles the amount of milk and makes it perfect atop tea or maybe if you are a cappuccino drinker: even better. 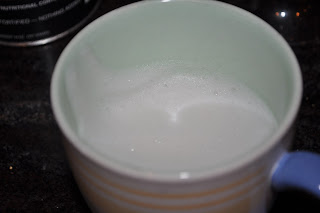 I haven't had much time to try out new recipes or post about them. Honestly, figuring out what's for dinner stresses me out almost every night! The only time I seem to have right now is during nap time and my goodness, cooking dinner isn't what I want to be doing during naptime, so thinking about what to make for dinner has been a struggle to say the least.

Nick is in the phase where he inhales something one night and won't even try it the next night. He gets veggies in the squeeze packs of baby food

and in smoothies. I try for pasta and sneaking it in other places but usually I fail.

I tried these Veggie Pancakes which reminded me of corn fritters. I thought they were excellent!  Nick wouldn't even try them. I can't stand it when he won't even TRY something I make. 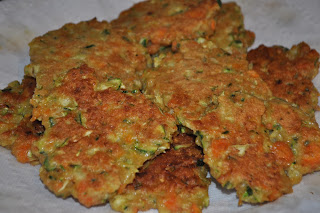 Then - Bill has been telling me my black bean sliders have been pretty tasteless lately and quite honestly, I've just been dumping in a can of beans with an egg and maybe some quinoa or whatever is around... so rightly so.  Bring in Sarah aka Mama Pea to make a better burger. They were excellent!   Highly recommend. Again, Nick hardly ate any, but what can you do. 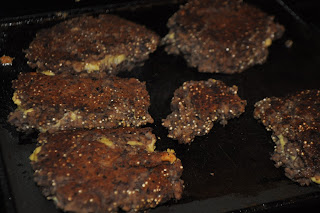 I'm inspired by moms like Sarah and I feel like if I am going to be a stay at home mom that I need something. She has this awesome blog with recipes and wrote a recipe book. I think that's awesome and right now can't fathom doing anything as remotely successful but I feel like I need to find my path like that. : (   What is my path? I can't even think of ideas, but I see people with etsy shops and creating their own businesses and I feel like I should be capable of this.  It would be cool to have a very successful blog, but let's face it, I can't even find the time to post on a daily basis. At the very least, I want to have some kind of a teaching job part-time but there's nothing out there right now.  I need something besides being a mom, ya know? Sarah's book is on Amazon and I pre-ordered it.  I haven't ordered a cookbook in a long time but plan to use this one all the time. Vegans check it out! And non vegans too! 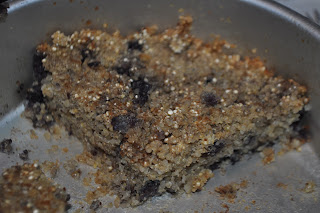 Breakfast today was a quinoa breakfast pizzert. I used quinoa flour for the flour, blueberries and about 3/4 cup almond milk and 1 T coconut oil. Nick didn't like that either.
Posted by N.D. at 8:39 PM