Life in the fast lane...

Has not been what I expected! On Wednesday, the lane that I swim in already had 4 swimmers when I arrived so I hopped into one of the fast lanes. I went last. Here's how it went: Usually, I swim in a lane where the intervals are not challenging, but there is hardly any rest between sets. I moved over and the intervals are still not killing me, but they are more the speed I'd like to be swimming. However, in between sets, way too much blabbering was going on, to the point where my body was not warm anymore when we started the next set! I'm there for a limited time and want to get in as much yardage as I possibly can, so I was really frustrated to see the lane I was in and lane next to it just blabbling away about people that I didn't know and conversation that I couldn't join into. No one talked to me at all, besides asking me if I wanted to go ahead of them. It was a real downer!! I got in 2600 yards in 50 minutes when I was hoping for 3000.

I thought today I'd give it another try, and I did. Same crap. Today while the bullshitting went on, I just turned around and swam 50s when we finished each set until they were ready to start again. I don't feel comfortable saying something, because I just started a month or 2 ago, and just joined the lane I'm in. I don't want to be that person. I don't know if it is better to keep swimming at faster intervals and just swim when they are talking (and be the most antisocial person ever - but I am there to swim not chat) or swim slower intervals with less rest. Today I covered the whole workout 3200 yards but mainly because I had an extra 10 minutes since Bill didn't have to be in early. What are your thoughts? 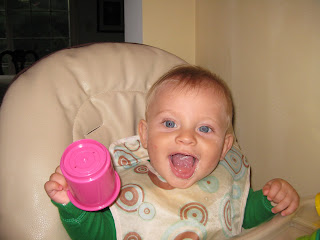 In Nick news, he had tofu for the first time yesterday. He seemed to like it. He'll be 7 months in 2 days - which makes me feel kind of sad/sick to my stomach that he is growing up so quickly!

I'm happy to say that I've done a nice job eating clean this week. There was a small bowl of ice cream here and there, but it was small, and it was GOOD! I'm looking forward to hopefully seeing some results in the weeks to come if I can keep it up! Yesterday I went the whole day without eating a Werthers hard candy (huge for me, I usually eat at least 3 a day, but probably up to about 8 of them). We'll try again today!
Posted by N.D. at 8:07 AM